Dealing with outliers and missing values in a dataset

What is an outlier?

In a random sampling from a population, an outlier is defined as an observation that deviates abnormally from the standard data. In simple words, an outlier is used to define those data values which are far away from the general values in a dataset. An outlier can be broken down into out-of-line data.

For example, let us consider a row of data [10,15,22,330,30,45,60]. In this dataset, we can easily conclude that 330 is way off from the rest of the values in the dataset, thus 330 is an outlier. It was easy to figure out the outlier in such a small dataset, but when the dataset is huge, we need various methods to determine whether a certain value is an outlier or necessary information.

There are three types of outliers

The data point or points whose values are far outside everything else in the dataset are global outliers. Suppose we look at a taxi service company’s number of rides every day. The rides suddenly dropped to zero due to the pandemic-induced lockdown. This sudden decrease in the number is a global outlier for the taxi company.

Some data points collectively as a whole deviates from the dataset. These data points individually may not be a global or contextual outlier, but they behave as outliers when aggregated together. For example, closing all shops in a neighborhood is a collective outlier as individual shops keep on opening and closing, but all shops together never close down; hence, this scenario will be considered a collective outlier.

Why do we need to treat outliers?

Outliers can lead to vague or misleading predictions while using machine learning models. Specific models like linear regression, logistic regression, and support vector machines are susceptible to outliers. Outliers decrease the mathematical power of these models, and thus the output of the models becomes unreliable. However, outliers are highly subjective to the dataset. Some outliers may portray extreme changes in the data as well.

Causes for the presence of outliers 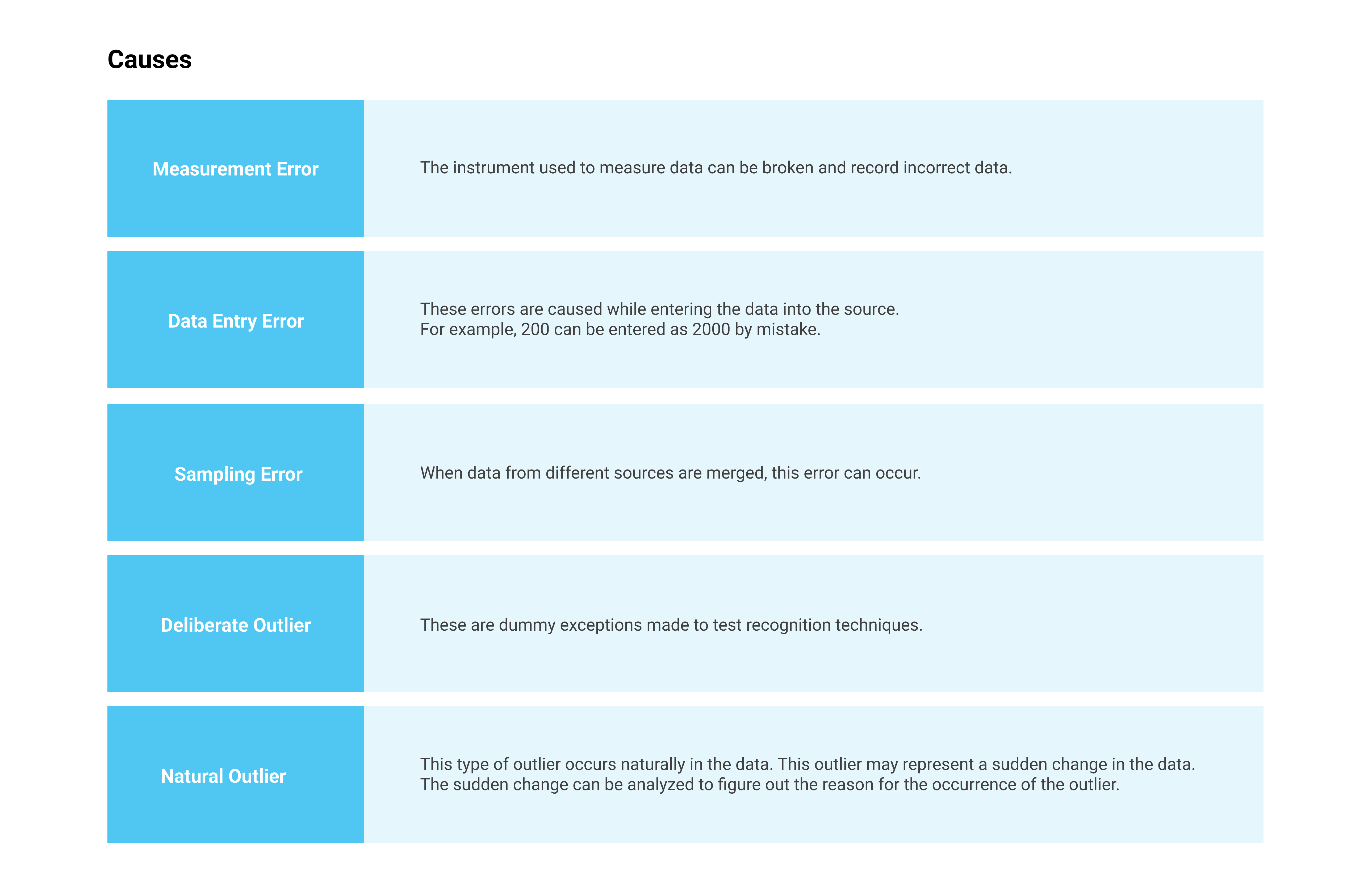 Removing and modifying the outliers using statistical detection techniques is a widely followed method. Some of these techniques are:

What are Missing values?

In a dataset, we often see the presence of empty cells, rows, and columns, also referred to as Missing values. They make the dataset inconsistent and unable to work on. Many machine learning algorithms return an error if parsed with a dataset containing null values. Detecting and treating missing values is essential while analyzing and formulating data for any purpose.

There are several ways to detect missing values in Python. isnull() function is widely used for the same purpose.

dataframe.isnull().values.any() allows us to find whether we have any null values in the dataframe.

dataframe.isnull().sum() this function displays the total number of null values in each column.

Remedies to the outliers and missing values

What should be done with the outlier and missing values then? Drop them? Replace them with another value? This entirely depends on the kind of data we are dealing with. There are various methods to treat null values and outliers, and after a deep analysis of the data present, one can estimate the way to be used for treating the null values.

Treating missing values and outliers is an essential step of data cleansing and preparation and should be one of the first operations done on a dataset. Only after these steps are administered is the data considered usable to build models and take insights from. Only after the data is treated of the outliers and the missing values and other deformities,it is taken to the next step of the data analysis cycle i.e data pre-processing.

Your Trusted Partner for Data Visualization

TABLEAU vs POWERBI - WHICH ONE TO CHOOSE?