Market-mix modeling is a technique that helps in understanding the impact of different marketing mediums or campaigns on sales. MMM enables the end-user to judge the effectiveness of marketing inputs in terms of ROI.

Why do we need market-mix modeling?

Since the world is moving more towards the digital age, it's becoming easier to capture data and turn that data into insights based on which major decisions drive up the profit margins. MMM can help in answering questions like “which campaign should we run?”, “what are the driving marketing exposure variables that are contributing more in terms of revenue?”, and “what steps should be taken to increase the profit?”

In-depth analysis and building a marketing mix model can be very beneficial for any organization that depends on its marketing.

Let’s understand the need for MMM through a Case Study.

For major FMCG players, investing in marketing is a well-thought step and can always give the player a competitive edge. Henceforth, L’Oreal was about to give close attention to it. The most important objective was to increase the sales both on the online platforms as well as offline by identifying which marketing platform is performing better than the other and generating more ROI. To achieve that, they needed to know how all the different marketing campaign and mediums are affecting their sales. Initially, they selected a particular hair-category product and based all the analysis keeping this product as the center of attention. In the early 1980s, MMM, in general, was done using linear regression equations to judge the effect of marketing spends on sales, however, variables like demographics, employment rates, seasonality, temperatures, and more factors like this were not included in the model. At the very foundation of this project for L’Oreal, they started to identify which variables could impact sales; these variables were both media-exposure variables and non-media-exposure variables. After listing these variables, they were made to fit in an econometric model. Using statistical techniques each variable was judged and how it was contributing to the sales. L’Oreal advertises on YouTube and Youtube-like platforms. After building the model, they noticed that YouTube was leading the race in terms of ROI. In 2015 alone the ROI was 6.5X than that of the previous year. With this in mind, L’Oreal made more changes and invested more in YouTube. This led to revenue generation which was 9 times the actual investment that L’Oreal did on YouTube in the incoming years. Finally, this study also showed that ‘always-on presence’ on YouTube was more beneficial than just short-term major advertisements. The growth and these insights were only delivered because of the marketing mix modeling done by the company.

ATL Marketing (Above The Line)

BTL Marketing (Below The Line)

BTL consists of advertisement activities that are very specific and are meant for a targeted group of customers. BTL is focused more on conversations rather than brand building. Eg, sales promotions, events, in-store marketing.

“Adstock is the prolonged or lagged effect of advertising on consumer purchase behavior.” - Wikipedia.

Adstock also helps in estimating diminishing returns. It is a known fact that any advertisement creates some impact on the consumer’s mind and at some point, there will be no or less effect on their minds. Still advertising after that point will result in fewer sales and ultimately lower ROI. Adstock takes care of this and can approximately estimate the diminishing point at which the Ads can be stopped or altered.

Facebook has built Robyn which has automated the MMM needs for organizations. This model is not just the traditional regression approach that was used when building a marketing mix model, it uses Facebook’s AI library ‘Nevergrad’ which brings evolutionary algorithms into the picture along with their Prophet package and Ridge Regression. This hybrid approach helps in reducing human bias and gives insights based on which any organization can change its marketing plans. It also has a budget-allocator which is based on a gradient-based constrained non-linear solver which helps in reallocating budgets. Due to the automation, frequent modeling can be done by tweaking values in the budget allocator.

Since this approach uses Prophet [which is another Facebook OpenSource library generally used in forecasting], components like the seasonality effect, trend shifts, and outliers up to a level are taken care of. Thus, our final model will be built on these factors. We can also explicitly pass the Holidays list in Prophet which helps the model to learn better.

We can have multiple media variables like facebook spends, tv spends, radio spends, print spends and press spends. We can also incorporate the impressions generated from these mediums like average CTR.

Along with the above media-exposure variables, we can include competitors' sales, temperature, unemployment rate, etc. These factors don't have a direct relationship with the media variables but play an important role in determining sales. Robyn takes care of this as well.

Let’s have a look at the end result of Robyn; what insights do we get?

Insight : This chart helps in understanding the effect of the variables that we have passed in the model with the response variable. Here, the season has 36.66%; this indicates 36.66% of sales can be attributed to the season.

Probable Action : Since the season has a major influence on sales, the seasonal advertisement would be beneficial.

Insight : This chart compares the average investment in different channels v/s the average effect these channels had on the sales. ROI is also given here.

Probable Action : We can see that medium ‘search_clicks_P’ has almost double the effect of the average spend on it. This medium is expected to generate the highest ROI. Hence, the company can invest more in this channel. 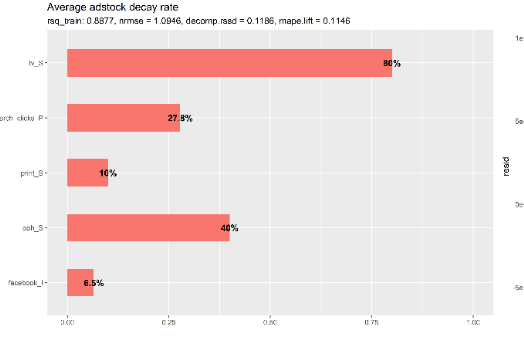 Insight : This chart represents, on average, what is the percentage decay rate each channel had. The higher the decay rate, the longer the effect in time for that specific channel media exposure. 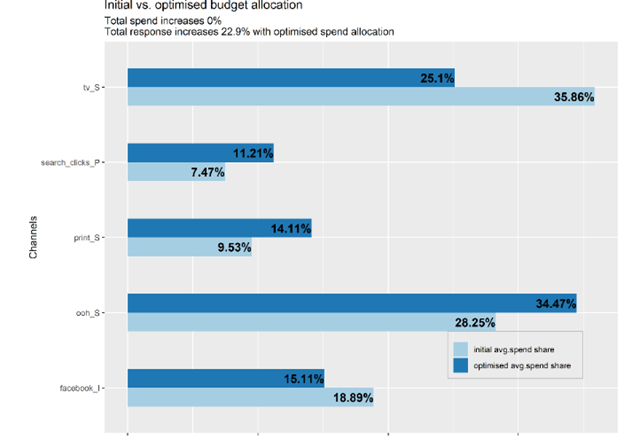 Insight : This chart represents the initial average spend on the different channels v/s the optimized spend per channel that is suggested by Robyn.

Probable Action : Based on the results produced by Robyn, the company may increase its spending in ‘search_click_P’ and reduce it in ‘TV’ due to its prolonged adstock effect. It should be noted that the total budget remains the same. Allocation of budget on the different mediums has been optimized. 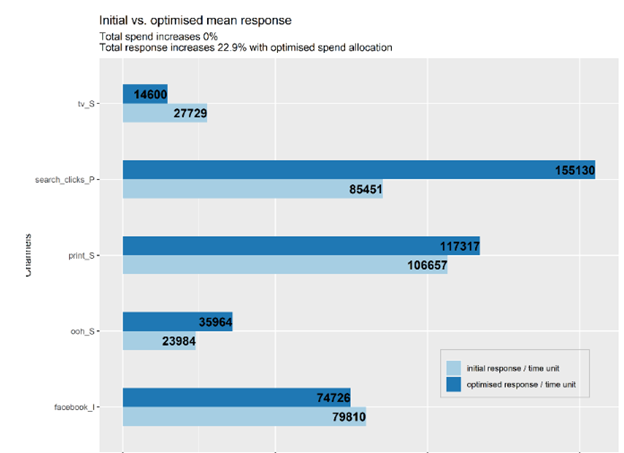 Insight : This is similar to Chart-4. This chart helps in understanding the average expected response i.e sales after adapting to the new marketing spend allocations.

Probable Action : If the budget has been allocated as mentioned in the above chart, ‘search_click_P’ will gather almost twice the response as it used to do earlier. Also, it was the medium that will be generating the highest ROI.

TABLEAU vs POWERBI - WHICH ONE TO CHOOSE?